A muse is invisible – a voice in one’s head with more knowledge than one gives themselves credit for. In my present work-in-progress, ‘DISAPPEARRING TWICE’. Aurelia Marcus retires to an isolated island to live out her days before complying with an extraordinary pact made in high school.

When Aurelia was seventeen she was confronted by Jacobina, the dispirited spirit of the girl in Vermeer’s ‘Girl With A Pearl Earring’ masterpiece, after a slide projector in her art history class expelled the girl’s image into the world.

Jacobina wanted to be released from her imposed curse of immortality to reincarnate with her beloved. Aurelia, convinced she will eventually succumb to her family’s curse of dementia, agrees to avoid death altogether by melting into the painting as Jacobina ventures out.

When the girls were seventeen their scheme appeared to be a pact made in heaven, but now, fifty years later, Aurelias’s recurring disappearing acts are out of control and she yearns for the high school love she sacrificed in good faith, and to resolve a mysterious incident she’s suppressed since the twelfth grade.

The eccentric Aurelia relies on several voices in her head to guide her, but out of desperation, she attaches the loudest voice to a familiar object with a face, the Felix clock in her kitchen, who becomes a tangible muse she can turn to at any hour.

Aurelia also depends on Canary, a rescue dog adopted as a guardian against an untoward intruder who threatens her privacy. Canary, named for the early warning canaries miners took down the mines, turns out to be a natural therapy dog able to ground Aurelia during unprompted ‘episodes’ of lucid memory shifts she calls her ‘earthquakes of the mind’.

The term ‘senior’ takes on a new meaning when spontaneous school flashbacks and futuristic presentations trigger a new take on life and death, but then the strangest of strangers appears with a compelling solution.

Is Aurelia’s unstable mental state a lucid dream or is she being dreamed in a parallel dimension? Is reality the stuff of dreams? Appearances can be deceiving, and time is running out.

But there’s a ghost of a chance Aurelia will find her way home before the eleventh hour transforms her into a painting. 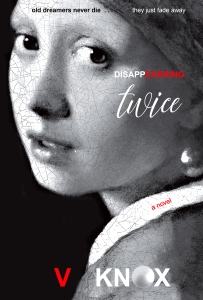 [Apart from the Felix clock with its roving cartoon eyes, the kitchen is one of Jacobina’s favorite hangouts… I don’t like to use the word haunts, although I can confirm that pestering the living with requests is the essence of haunting, and, I believe, the primary inclination of apparitions in general.

Jacobina is more than a vaporous shell. She’s family. We’ve been together ever since we met in high school when she proposed a pact to resolve our mutual issues of mortality. Jacobina wanted a second chance to live and I wanted to avoid death altogether. We were unbelievably young. It had seemed like a match made in heaven.]

Here is the link to my available books: https://www.amazon.com/V-Knox/e/B0094K0Q7Y