MAY DAY or MAY DAY! … 6 degrees of separation 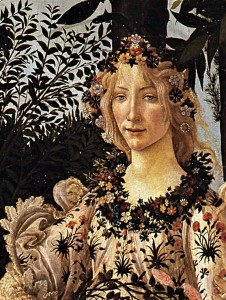 Is MAY DAY an international distress signal or a celebration of dancing and singing to honor FLORA, the Roman goddess of flowers? With human life balanced precariously on the tipping point of extinction, I guess there’s no earthly reason why it can’t it be both.

MAY DAY accompanied by an exclamation mark, stems from the French ‘m’aidez’ which translates as ‘HELP ME’. It is the audible counterpart to S.O.S. – Morse Code for SAVE OUR SOULS. Rescue is given priority to messages that repeat the words may day several times.

MAY DAY, the seasonal celebration of spring and rebirth, is an ancient festival of merriment and thanksgiving where a local Queen of the May is chosen and crowned with flowers on May 1st .

CROWN Perversely, the Latin word for crown is coronam. Biologically-ANATOMICALLY, it’s a part of the body resembling a crown. ASTRONOMICALLY, the sun’s corona visible during a total eclipse is a rarified gaseous envelope of the sun and other stars – a pearly shaped glow surrounding the darkened disk of the moon due to the diffraction of water droplets. DROPLETS can be injurious to one’s health. THE SUN’S CORONA is a small circle of shining light during a time of absolute darkness.

SIX DEGREES OF SEPARATION is the premise that people (and words), are six, or fewer, social connections away from each other. Sounds eerily familiar.

The lovely lady in the painting is FLORA, THE GODDESS OF SPRING in Sandro Botticelli’s ‘PRIMAVERA’ – a title that echoes the words VERITY (Latin for truth) and PRIMA (Latin for ‘at first sight’). PRIMA has settled into our vernacular as prima donna and other references to number one. 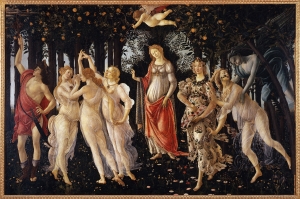 I could go on because I could segue into the fanciful novel I wrote about Botticelli but I won’t. You may, however, discover it here https://www.amazon.com/V-Knox/e/B0094K0Q7Y

1 Response to MAY DAY or MAY DAY! … 6 degrees of separation