THE REMAINS OF THE DAY

baby shoes of an unknown child aboard ‘RMS Titanic’

The illegitimate son of a lawyer and a woman we know only as Catarina, is born in the town of Vinci, in Tuscany, Italy. The child’s unspectacular entrance into the world is minimalized to protect the reputation of a prominent family.

The boy is ‘stored’ out of sight as an unlikely heir if there are no legitimate sons. His mother is hurriedly married off to a brutish local mercenary for a fee, and dispatched in disgrace to a remote location in the surrounding countryside.

Leonardo da Vinci disappears, unsung, to live in a rough peasant’s cottage and fend for himself against a bully of a stepfather and a downtrodden mother. But, he escapes early into the landscape that offers him sanctuary. A retreat that soon becomes his playground and school, and Leonardo emerges a ‘renaissance boy’ who will change the course of art, engineering, and science.

The remains of this April day in 1452 relies on what is recorded – the single mention of  Leonardo’s birth in a family bible by a farsighted and practical paternal grandfather:

“There was born to me, a grandson, the son of Ser Piero my son, on the 15th day of April, a Saturday, at the third hour of the night. He bears the name Lionardo.”

During his sixty-seven years, Leonardo fills copious notebooks, meticulously recording his every waking idea accompanied by endless detailed diagrams and side-notes. The deepest longings of his mercurial nature are hidden in plain sight between the lines of his eccentrically encoded entries. But privacy is paramount to Leonardo and he remains guarded concerning the dreams and memories of his anonymous childhood. Other than posthumous hearsay, little information has survived of the master’s early years. Hindsight delivers a few anecdotal stories. Fate steps in, more mysterious than the smile of a silk merchant’s wife whose face reincarnates as the most famous portrait in the world.

RMS Titanic, declared unsinkable, sinks on her maiden voyage, in the freezing waters of the North Atlantic 370 nautical miles from the southern coast of Newfoundland, Canada. In a few years, an artifact of contraband salvage, a pair of baby shoes kept hidden in a drawer, makes its way into the Halifax Maritime Museum in Nova Scotia – a poignant reminder under glass of one of Titanic’s many unknown child passengers.

The remains of this April day in 1912, relies on what is recorded: the diaries, the first hand reports, telegrams and letters, the anecdotal hearsay, the speculations and embellished theories of hindsight, and the newspaper clippings. 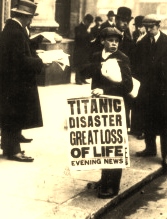 LIFE & DEATH mark significant historical anniversaries. April 15 is a date that celebrates a creative genius and commemorates the lives lost at sea in an unthinkable maritime disaster. From the wondrous to the disastrous:

Take a moment today to honor the passengers of RMS Titanic as well as celebrating the birthday of a dismissed child who survived his shaky childhood beginnings to become the quintessential ‘renaissance man’ who changed the history of art forever.

The newspaper boy immortalized in the photograph has long since passed on, but the headlines he’s brandishing grow evermore sensational.

In 1985, the Atlantic gave up Titanic’s resting place, a few of her secrets, and hundreds of recovered treasures that evoke a sense of luxurious despair and compassion. And not long after, in 2009, Millvina Dean, the youngest passenger and the last survivor of Titanic, succumbed to the pages of history.

Now, more than ever, untold stories rise from the depths of a writer’s imagination to move readers eager for truths entirely ‘stranger than fiction’.

I liken the writers of today’s fiction to the wandering minstrels of old who fanned the fading echoes of folklore into trailblazing songs of derring-do. Stories of heroes that once traveled by word of mouth are rewoven from lost threads to the latest word of research, into novels and screenplays and movies of mythological proportions.

But, even ghosts have muses. We authors persuade story phantoms to unlock the past, air their memories, reveal their heartbreaks, and narrate their untold stories.

In this tradition, bookends of life and death, 460 years apart, have inspired two of my stories.

‘LISABETTA a stolen glance’ – book one of a fanciful story of Leonardo da Vinci’s sister, in four volumes

From anonymity to the most recognized face in the world. For five-hundred-years, the embittered spirit of the ‘MONA LISA’ has been trapped inside her portrait, waiting impatiently behind her smile to redress a five-hundred-year-old case of mistaken identity.

To be liberated from her portrait and reclaim her rightful place in history as Leonardo da Vinci’s sister, Lisabetta awaits a special advocate to champion her cause – an autistic boy seeking recognition within a society that dismisses him as flawed.

‘Lisa’ has no intention of allowing either of them to remain anonymous.

‘Lisabetta – a stolen glance’, book one of four, is scheduled for launch on Amazon in June 2018.

‘THE UNTHINKABLE SHOES’ – a ghost story of reincarnation and willpower about a boy who loses his shoes between heaven and the deep blue sea.

When death separates a pair of child passengers onboard Titanic who were destined to marry, the ghost of the boy chooses to remain earthbound as the surviving girl’s invisible childhood companion in order to reach heaven. Finding a pair of lost shoes is their one chance to stay together.

1 Response to THE REMAINS OF THE DAY