The ‘Green Man’, is a mythological figure depicted with leaves for hair, in the tradition of the god Pan, protector of woodlands and defender of natural green spaces. He is usually green or autumn colors, depending on the season. 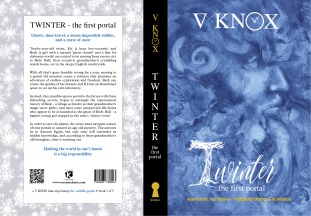 These two ‘Green Man’ cover illustrations are blue because when the Green Man is absent from the countryside, vegetation atrophies, legend declares a permanent winter settles over the landscape, and the world hovers in a state of frozen decay.

Winter looms big in my middle-grade ‘Bede Trilogy’ set in a liminal landscape on the edge of reality and enchantment where a sentient stately home presides over an area of Great Britain linked irreversibly with Pangea and ancient Egypt.

Bede Hall, the star of the series, is named after the ‘Venerable Bede’, a scholarly Anglo-Saxon monk c. 670 A.D. to 730 A.D. – an historian, best known as the Father of English History who devised a way of calculating calendar dates. An idyllic luminary inspiring a time-slip adventure that links science, history, and the folklore of Great Britain and Ancient Egypt.

Bede Hall is a fictional stately home near Hadrian’s Wall and close to the Isle of Lindisfarne. I liken Bede Hall to Downton Abbey for middle-grade readers. A great family’s seat for generations, set against the challenges of aging in the modern world. The curmudgeonly Hall thinks for itself and rules its tenants, the weather, and time, in no uncertain terms during an extremely uncertain year. Bede Hall lies empty with a for sale sign on its imposing gates while its eccentric matriarch drifts in a fog of memories in a retirement home. It faces its worst nightmare when circumstances wake an ancient foe eager to have a second  chance for victory.

But before the Hall can save the world, it must save itself. It faces demolition, or, what it considers the worse case scenario of being sold to greedy developers who want to turn it into an hotel.

The Hall has no intention of such an ignoble end. In fact, it claims responsibility for saving humanity if only its pesky financial concerns would go away. In desperation, it summons its aging matriarch, wasting away, who brings her twin grandchildren to live, rather more like camping out, in musty rooms with dodgy electrics, near a village with decidedly strange inhabitants. The Hall’s is not the only voice calling for help.

Ghosts, time-travel, a dozen terrible secrets, and a curse of snow takes a pair of telepathic twins on an adventure in ancient Egypt and into the future where the safety of earth’s ecosystem lies in their hands

Twelve-year-old twins, Kit (a keen boy-scientist) and Bash (a girl with a natural ‘green thumb’ and a flair for elaborate words) are forced to move from a noisy city to Bede Hall, their eccentric grandmother’s crumbling stately home, set in the sleepy English countryside.

With all that’s gone horribly wrong for a year, moving to a grand old mansion seems a solution that promises an adventure of endless exploration and freedom. Bash can create the garden of her dreams and Kit has an abandoned space to set up his own laboratory.

Instead, the pair discover a portal to the future with a terrible secret, begin to untangle the supernatural riddles of a mysterious village as bizarre as their grandmother’s magic snow globe, and meet the resident ghost-child of Bede Hall and some unexpected life-forms, some who appear to be as haunted as the presence of the hapless young girl trapped in the attic.

In order to save the planet from a natural disaster, one twin must ground the landscape of Bede while the other travels to the past to unravel the missing gaps of natural history.

The answers lie in Ancient Egypt, but only time will surrender its hidden knowledge.

Book one, ‘TWINTER’ (combining the words twin and winter), becomes the name of a team of teenagers, ghosts, and sentient animals given the task of settling an old score with an ancient curse in order to protect the future.

HOURGLASS OF TIME – a painting by Veronica Knox

Book two: ‘TIME FALLS LIKE SNOW’ by V Knox – the continuing time-slip adventure for older middle-grade readers, that links the mythologies of Great Britain and ancient Egypt, will be available in May, 2018.

Book three: ‘TOMORROW AGAIN’ by V Knox – concluding the Bede Series, will be launched in 2019

**the cover art is from a series of original paintings by the author and may not be printed, reproduced or digitally posted without written permission from the author.

A list of V Knox’s novels and samples of her artwork may be viewed on her website. www.veronicaknox.com