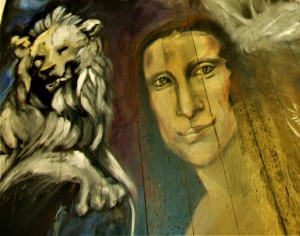 For anyone who wonders if it’s true that writers’ characters can get inside an author’s head, the answer is… absolutely. Personally, I welcome such invasions because there are iffy times when my muse and I are at complete odds.

“SPEAK FOR YOURSELF,” I said to the ‘Mona Lisa’: And so it was, when I was stuck writing a prologue for ‘Lisabetta’, the story of Leonardo da Vinci’s kid sister, she interrupted me in a pique of broken English. Without hesitation, I got out of her way and gave her the floor, so to speak (this image is one of my ‘floorals’, so named by me for a mural painted on a floor). “Okay, go for it,” I said. “I’ve lost the plot. You were there. I’m just making it up as I go along.”

The whole thing felt dictated – an ethereal telegram, delivered in a breathless stream which is how my muse behaves on a good day. I typed her impassioned speech without stopping, translating her Italian phrasing into modern speech:

“My name, Lisabetta Buti was an affront to my existence. I was Leonardo da Vinci’s beloved kid-sister, his assistant and apprentice, and the mother he was denied. We were born six-years-apart, as close as twins, and when I was old enough to walk, my brother made me a promise that we would never be parted.

And so, it transpired, in the particularly vexing season of 1503, while my brother was pressed into painting the dreary wife of a silk merchant, Leonardo was overcome, as in his earlier years, by a new quest. And with all due haste, circumstances conspired that he was able to complete the Giocondo commission, and I was cajoled into posing for a new kind of portrait. But here, my identity crisis sprouted wings because, by sheer happenstance, Mrs. Giocondo and I were both named Lisa.

It was the sort of portrait only a visionary would attempt. Leonardo believed he could capture the true essence of a human spirit in paint, which is how my life force became imprisoned in my portrait.

Not long afterwards, Leonardo kept his promise, for we remained inseparable even after my death, and I traveled with him as his sentient companion to the end of his days – a living icon painted on a small panel of poplar wood.

And as time progressed, a further humiliation was heaped upon my portrait by the title ‘La Gioconda’ (the laughing woman). One small letter is all it takes to confound history.

SILENT K PUBLISHING promoting the indie books of V Knox – cozy time-travel novels for those in search of strange stories to read as slowly as possible.