detail of the ‘Tobias and the Angel’ altarpiece from the studio of Andrea del Verrocchio c. 1467

There is a fifteenth-century Italian painting in the National Gallery of London entitled ‘TOBIAS AND THE ANGEL’. I have a love/hate relationship with this 33 in. x 26 in. panel for a Florentine altarpiece.

No doubt, this painting seen from ‘on high’ in less than optimum lighting conditions, was not only significantly removed from close scrutiny by its location, but of less interest to spectators more intent on the religious goings on beneath it.

It’s what I would call a hands-on teaching device, and too many inept hands have contributed to its production because the workshop where it was created was also a teaching institution for young artisans. Apprentices, often unchaperoned, dived into projects and did their best. Like any factory, there were deadlines to complete and ever-present incoming orders. And like any undisciplined kitchen, this painting suffered from the effects of ‘too many cooks spoiling the broth’… save one.

Leonardo da Vinci, apprentice wunderkind, entered Verrocchio’s ‘bottega’ as a young teenager. His natural genius singled him out, and so it’s no surprise that the elements of this painting that sing amongst a discord of tuneless voices are where his contributions shine.

Clearly, not all apprentices are created equal. Finite details are the precepts of artists with a passion for accuracy. Leonardo’s sensitivity and dedication to keenly observing and documenting the natural world: flora and fauna, the atmospheric effects of weather (sfumato), and especially light, are his special trademarks.

Master artists develop clear forensic signatures that reveal their creative presence at first sight. Leonardo da Vinci’s input to this blatantly flawed group painting are its saving grace. Experts on the specific forensics of Leonardo have settled on three areas that telegraph ‘Leonardo was here’: the sparkling fish, the boy’s windblown hair, and first prize – the ghostly dog, disappearing from one of Leonardo’s early misadventures with mixed media. (case in point: ‘The Last Supper’ and its infamous ongoing mishap with an untried plaster recipe)

The dog, painted lightly in an early experimental stage of oil paints over an egg tempera base, didn’t quite stick and it has been slip-sliding from the surface, fading deeper into a ghostly apparition from the effects of age and light with every year.

We can see through the dog to the landscape behind it, but this only gives the prancing dog more appeal. Fading does not distract from its lively personality. It’s alert.

This is a real dog. 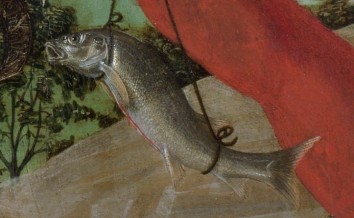 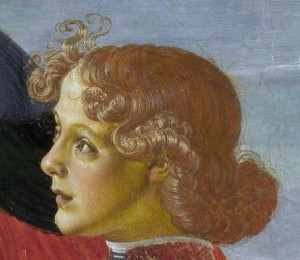 The fish is real. The boy’s delicate fly-away curls are affected by a real breeze. ( p.s. ignore the face by another artist who has attempted an impossible three-quarter view and a full profile at the same time… kind of creepy)

But what I love most about this painting is that it survived. Many paintings are lost. This one gives us a snapshot of a master genius as his talent manifested in his early years.

THE BIGGER PICTURE… THE EXAMINED ART

Mistakes are part of the learning process, and an altarpiece is not meant to be scrutinized up close and personal as a painting hung in a modern gallery. Most of its glaring errors of perspective, composition, and anatomy would have escaped the untrained eye… and, I speculate, overlooked by the trained ones in order to meet a contract’s delivery date. Deadlines rule. Time is business.

Leonardo eventually surpassed his teacher, Master Verrocchio, who was known for his three-dimensional statues in clay, terracotta, wood and marble, and his engineering skills. In my opinion, painting the human figure was clearly not Verrocchio’s forte. His painted figures were either boneless or they were severely deformed (see the boy’s twisted leg and the figures’ unnatural claw-like fingers) 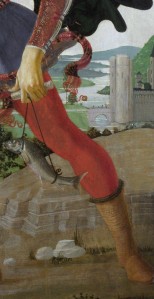 The angel’s ungainly marble body is conveniently hidden under vast layers of elaborate robes. He and the boy are placed in close proximity like pasted cardboard dolls as if they are interacting but they are inanimate shapes.

The boy’s painfully twisted limbs, unable to be hidden under drapery, seem made of rubber. And here we can also see that the illusion of a true depth of field is dashed as the tassel from his cloak has become entangled with a tree on the horizon, miles away. The angel’s wings seem carved from solid wood, (not a feather in sight), would scarcely flutter in the strongest tempest and hardly lift a marble angel off the ground, and a cloud, more like a horizontal icicle painfully pokes the boy’s head. And what, pray tell, are the white puffballs on the road? Poached eggs made of stone, blobs of shaving cream, seashells with legs, or evidence of the first popcorn explosion? No… they are plain Italian rocks.

Andrea del Verrocchio’s workshop, where this group painting was created, was more a factory than an artists’ studio. The truth is, the art studios of fifteenth-century Florence were commercial factories staffed by dozens of trade workers and artisans along with a motley crew of aspiring apprentices with various levels of expertise. Apprentices were trained by mucking in as early as possible, anywhere an extra hand could be employed, and time constraints in a constantly moving production line meant quality control was not always a prime concern. Deafening with the constant sounds of construction: machinery, chisels on marble, wood being sawed and hammered together for scaffolding and custom designed furniture, and the squeals of winches, one wall needed to open to the air in order to alleviate the heat of blasting furnaces working metal, pottery kilns, and the noxious fumes of chemicals from distilling varnish, mixing plaster and grinding paint.

Amongst the din and dust, engineers and architects designed buildings, bridges, and weaponry. The wholesale manufacture of ceramic saints, props for theatrical projects, fine gold jewelry, and heavy armor were made in the same creative chaos.

A typical classroom it was not.

Be it art show or dog show, in my book, Leonardo’s pup takes first prize!