The next time you visit a gallery or open a book of renaissance art… what will a face in a painting say to you?

There is a spiritual hush in the rooms an art gallery. But only some paintings offer a peak experience. Some ‘speak’ while others remain silent. The event is subjective – only a few artists are able to capture a soul.

A painting is a ‘fly-on-the-wall’ that sees everything. A 15th century portrait witnesses events for five-hundred-years and absorbs them all. Like a phonograph record it is a flat and silent object until someone has the magic to unlock its music.

Can a person fall in love with a figure in a painting? And if you do, could it be that you evoke such emotions in return? Can love across a crowded museum be love at first sight? In my book ‘ADORATION – loving Botticelli’ it is. And in my latest twin novels ‘THE INDIGO PEARL’ and ‘PEARL BY PEARL’ it happens when a child of three opens a book of renaissance art. From that moment her life changes.

Delphi Sharpe, a traumatized orphan, hears the voices of past conversations of the artists and their models that emanate from paintings, and when the maternal presence of the ‘Mona Lisa’ offers her comfort, a quest begins to find two lost masterpieces by Leonardo da Vinci. Every painting encountered on her journey offers a piece of the puzzle because lost paintings long to be found, and like true mothers, an artist’s spirit cannot rest until their art ‘children’ are safe. But true icons offer Delphi more than clues to a mysterious disappearance; they offer advice.

When Delphi is fourteen she falls in love with a teenage boy in a portrait. The ‘till death parts us’ kind of love. The boy is Francesco Melzi, ‘frozen in time’ by his master teacher, Leonardo da Vinci.

Cecco and Delphi grow up together for thirteen years, five-hundred years apart, promising to meet, vowing be together, but a near-death experience traps Delphi and she is frozen in her own time.

In ‘THE INDIGO PEARL’ and ‘PEARL BY PEARL’ art and science meet in a clash of violence as cryogenics, the 21st century’s version of Sleeping Beauty’s hundred-year curse, separates the lovers. Now reincarnation pits two women against each other when they’re forced to share one set of memories in a future where time-travel is possible. 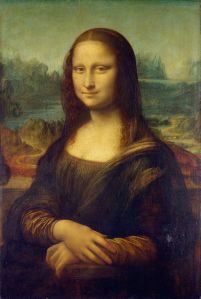 “Leonardo’s name and fame will never be extinguished. Alone, he vanquished all others.” – GIORGIO VASARI c.1550 ‘The Lives of the Artists’

Excerpt from ‘THE INDIGO PEARL’ Chapter five – An Icon of Great Price… the ‘Mona Lisa’ speaks:

Fame is always chance. Time creates the conditions for a moment of amber. Nothing more.

I’m sitting pretty now, but my life was never so protected. I am the likeness you’ve seen a thousand times. I’m a famous icon. I am the ‘Mona Lisa’– my brother, Leonardo, painted two.

I smile because you can’t see me. You observe technique and composition but I’m no more of a mystery than any woman. I’m hiding right here in front of you – a story as much as a work of art. I stare back, reading you, waiting for a sign of true recognition.

You analyze me, hoping to explain why I’m revered and others are not. Muses played a part, but stardom? That was chance. Obscurity is just plain carelessness.

My beloved brother believed mutual love and desire conceived ‘children of extraordinary intellect and liveliness.’ Pearls. He described a prodigy as an incarnation of human perfection. But even a perfect child who shines its true face on the world may lose its identity.

Leonardo wanted to fly, and somewhere between the seashores of birth and death his thoughts grew wings. In time, I flew alongside him, and he taught me the secrets of the birds and the updrafts, and how to tame the sky.

As my mentor, Leonardo gave me the art of seeing. Write down your thoughts, he told me, and if you can’t write them safely, paint them in plain sight so no-one will see. My dear child. Try to evade my gaze. When you look at me, you know I can see the real you – your true face, hiding in plain sight.

Leonardo called death ‘the great sea’ and as he journeyed towards it he grew more luminous. But running out of time troubled him, so in his last years at Amboise, he archived his imagination for future generations.

‘The great sea’ has taught me that life’s energy is infinite. I call it the great teacher. I’ve learned we don’t pass on; we move forward, and we can return to polish any magic we failed to honor.

I might be the old man you brushed shoulders with on the Louvre’s famous staircase or the child you saw feeding the pigeons in the pyramid courtyard or the cleaning woman you avoided on the second floor with her buckets and mops.

You can recognize a human pearl by their secretive smile and the way their eyes pin you with a mystery, but you have to pay attention. They’re hiding in front of you.

Here I am, waving to you across five centuries of chaos for no other purpose than to urge you to make peace with the art of veritas icona, your true image. Let me assure you again that losing one’s power is just plain careless.

The fifteenth-century was careless with its women. It misplaced them in the grandiose names of their fathers, but Leonardo immortalized my true image. I was known as Mona Lisabetta, the unmarried sister of the master, Leonardo da Vinci. We were both illegitimate, but as a possible heir, my brother was granted the Da Vinci name. As a daughter, I disappeared.

How fate loves to play with language. A ‘magic letter’ can drop from a hastily-copied document and change the world. Truth can be defaced by a clumsy inkblot, truncated by a myopic historian or nibbled into oblivion by an untimely mouse. Even more damaging for me, the artist Giorgio Vasari, a self-appointed authority who invented facts when only rumors were available, published ‘The Lives of the artists.’ Time loves to spin hearsay into a mystery. Vasari loved it even more.

My identity hinged on the transposition of a single letter, two coincidences, and a lie.

That letter was ‘a.’ Vasari sealed my anonymity by replacing my name with an expression – ‘the smiling woman,’ ‘La Gioconda.’ Gioconda became confused with Giocondo, the name of a close family friend. The coincidences? The name of Francesco Giocondo’s wife was Lisa; her married status decreed her Monna Lisa, and a brag of vellum, now lost, survived long enough to hint that Leonardo had painted Monna Lisa Giocondo’s portrait. The lie? Vasari, the consummate embellisher, fanned that anecdote into a serious claim. The rest, as you say, is history.

As ‘La Gioconda,’ my smile was translated from wistful to joyful until its significance supplanted the riddle of the Sphinx. How telling, and how ironic, that I’m the most famous face in the world yet no-one knows my true identity. If Leonardo had been less of a perfectionist would you be gazing at me now? Would anyone know I’d lived?

You may not credit the heights of art’s rising worth and swoon over the greater meaning of priceless. In my gallery, I’m so priceless I’m valued as a wonder of the world. The wonder is, I survived and other paintings did not. I’ve been trying to tell you. If you want to know what happened, open your heart. See. Listen. Hear. I was once alive and I still have a mind of my own. And you need insights to make sense of your own life.

I am a scrying bowl. If you can hear this much then my truth holds a message for you. Forget the museum guards. Ignore the rules. Reach over the barriers and touch the hem of my frame. As the oyster gives up its pearl, rejoice. Time has sent you an oracle. 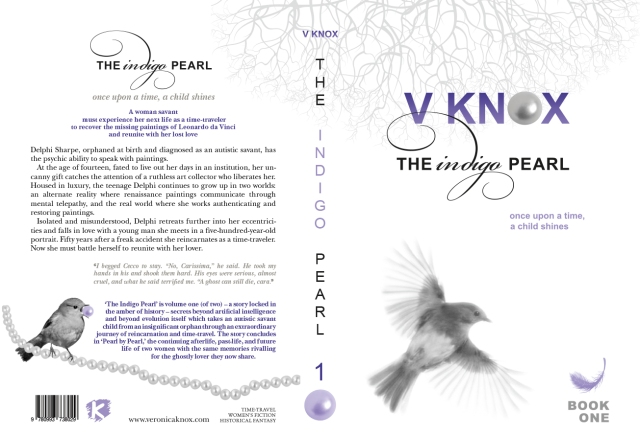