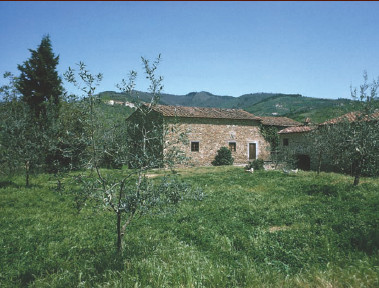 On April 15th 1452, at the 3rd hour of the night, no less. Leonardo’s birth was so recorded by his grandfather. Now that’s precise.

Where he was born is another story. Personally, standing in the landscape where Leonardo played as a child is enough for me. It seems appropriate to celebrate he is everywhere and no… where.

There is a record of the family using the font still existing in the parish church of Santa Croce for his christening. After that … there’s no place like home. Really. No. Place. It is impossible to know the location of the house where Leonardo da Vinci was born.

An honest tourist attraction would have to say: ‘Leonardo was born somewhere near here in a cottage like this one, give or take a few miles, although we wish it was here, we’re pinning him to earth for the sake of tourism.’ A farmhouse unmarked in its time is lost in a network of stone foundations five-hundred years old, maybe longer. Leonardo’s childhood home could have been standing two-hundred years by 1452.

Historical fiction has to jump serious leaps of faith. History never recorded Leonardo’s mother’s full name. She comes down to us as, Caterina. Women, in general, were insignificant. Their names were absorbed (read overwhelmed) by a list of their husbands ‘dynasty’ when they married. But apparently, Caterina had no such dynasty worth recording. Ever. Not even by her son.

Leonardo was probably born in a house in Tuscany, near the village of Vinci, no distinctive than any other. He lived ‘cheek by jowl’ with his mother, stepfather, five step-siblings, three cousins, an uncle and aunt and grandparents. What an obscure census report tells us, is he had a sister named Lisabetta.

What are the odds? Leonardo had a sister named Lisa! And many have observed Leonardo resembles the ‘Mona Lisa,’ as a sister just might.

What if’s began to flutter for me. I wondered … had she been the sitter for the Louvre’s ‘Mona Lisa?’ The most famous woman in the world being a woman whose identity was lost but for one mention in a faded document was too intriguing a storyline, and so I turned her life into a fanciful trilogy. 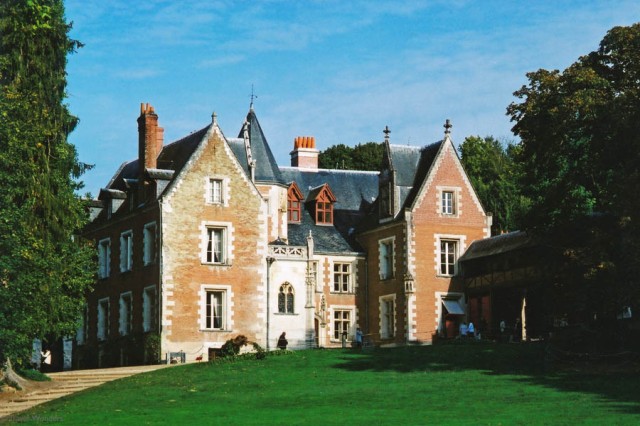 However, in the case of the manor house Clos Lucé, we can be sure of the proud declaration, ‘Leonardo slept here!’

Is it known for sure in which room? No, that can only be a calculated best guess, but we can say ‘Clos Lucé’ (its new name) was his last home and offered the last roof he slept under and was most definitely where he died. Although we cannot say with any certainty within a mile, which patch of soil or marble floor he was buried under.

His gravesite beside the church of St Florentin was desecrated in 1802, and his bones, along with his neighbors, were buried in a mass grave in a corner of the churchyard. Which corner is a wild leap of faith. Which bones, if any, would be impossible to authenticate even with modern forensics. Leonardo died in 1519. His resting place is unknown. Finito.

Tourists seem to need a shrine and to gaze at a plaque saying here he is, so there is one, but in truth, after the upheaval of the revolution, the churchyard where Leonardo was buried, was raked over and robbed of its most famous citizen. So much for fame.

Fragments of a damaged stone marker unearthed from a refuse pile in 1863, is tantalizingly inscribed: DEO (space) DUS ( space) VINC, but sadly, that’s it that’s all. Birth and death leave fragile footprints. It’s the life lived in-between which is worth celebrating.

If you want to follow Leonardo’s footsteps you must traipse the countryside around Vinci and walk the streets of Florence, and the Via Zenale in Milan. The site of his ‘once bequeathed property’ in Milan (scooped by the smarmy little creep, known as the ‘little devil,’ Salai, at Leonardo’s death) is located across from a massive fitness centre.

Reputedly, within a block or two of this site were the aristocratic stables of elite horses Leonardo used to sketch. Ironically, hundreds of years later, that site became the headquarters of an elite car manufacturer.

So, from the stables of the horses Leonardo used to visit, to horsepower, to physical fitness, traces of his original vineyard address is, by my reckoning, an apartment building and a parking lot, as near to destroyed as one can get.

If you need to walk mile in Leonardo’s shoes then you have tall boots to fill, and you will need to hunker down at the university of hard knocks and study whatever is around you, under you, and above you, at all hours of the day and night.

If you need to leave flowers on his grave you may as well plant a tree somewhere that could use one. Nature was his country. Birthplace and tomb are unnecessary for an immortal artist. There is no true marker here lies the great Leonardo, but he embodies the letters R.I.P … RENAISSANCE IN PERPETUITY

Veronica Knox has a Fine Arts Degree from the University of Alberta, where she studied Art History, Classical Studies, and Painting. In her career as a graphic designer, illustrator, private art teacher, and ‘fine artist,’ she has also worked with the brain-injured and autistic, developing new theories of hand-to-eye-to-mind connection. Veronica lives on the west coast of Canada, supporting local animal rescue shelters, painting, writing, editing other author’s novels, and championing the conservation of tigers and elephants, and their habitats. Her artwork and visuals to support ‘Second Lisa’ may be viewed on her website - www.veronicaknox.com
View all posts by Veronica Knox →
This entry was posted in Books, Fine Art, Historical Fantasy, Historical Fiction, literary fiction, Second Lisa and tagged Leonardo da Vinci, Lisabetta Buti, Mona Lisa, Second Lisa the novel, Veronica Knox author. Bookmark the permalink.