CASTLES IN THE SAND 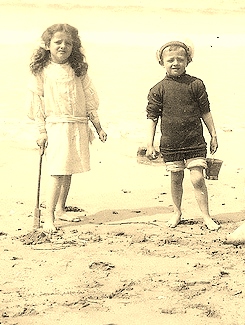 Reincarnation with a twist of fate. Two children on the Titanic, destined to marry, are torn apart when five-year-old Finn Cleary perishes on April 15, 1912. Now Finn must remain earthbound as a girl’s invisible childhood companion in order to reach heaven.

EXCERPT 1 from ‘THE UNTHINKABLE SHOES’

[I’m unceremoniously pushed out of the infant with the same force as the water that sucked me from the ship and propelled me to the surface, and I swirl away, caught in a stream of moonlight. Do I have somewhere to go? But where? In search of my mother? But which one? And who is this new force that takes my hand, pulling me into the cold? Is it the moon?

Mamie’s daughter may not thrive and I intend to keep my promise and take her place or watch over her, although I don’t see why Mamie can’t be her guardian angel. Sure that must be a mother’s first duty.  Still, a promise is a promise, and I mourn the loss of my second mother. Mam used to say third time lucky.

In effect I am a bodiless spirit who has been rejected, ejected from the body of an infant girl. It did nothing to lessen my sense of low self-esteem. I’m determined to leave the child in order to give her time to die in peace. Mamie had sensed her imminent death and who was I to argue with her. Mamie was perfect. The thought that I would be her special child and please her kept me as happy as I had any right to be, all things considered. In the meantime, the voice belonging to the hand that dragged me, shushed me. “Finn, it’s not too late. Mamie was wrong,” and then the hand let me go.]

EXCERPT 2 from ‘THE UNTHINKABLE SHOES’

[I’m towed back to earth as sure as lifeboat behind a ferry, and wake in a kitchen where a young girl is playing with a hideous doll. Her mother pours a glass of milk and suddenly I’m thirsty. The girl takes my sudden appearance as normal. “It took you long enough,” she says in her head. “Where’ve you been this time?”]

‘THE UNTHINKABLE SHOES’ –– a TITANIC-inspired novel by V. KNOX

A girl grows up with the ghost of a boy who must find his lost shoes to reach heaven.

– a novel of Literary Fiction, Magical Realism, and Paranormal Romance to be released on or before

1 Response to CASTLES IN THE SAND