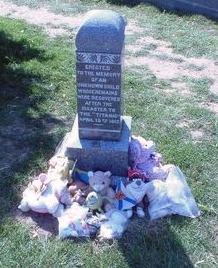 EXCERPT from ‘THE UNTHINKABLE SHOES’ by V. KNOX – a Titanic-inspired love story:

The expedition is a family tradition for Ma and me – a trip to the Titanic plot in the Fairview Cemetery. We wander down the outer paths but Finn hangs back. He doesn’t want to go near the marker for the unknown child. The one with all the toys. They’re soaked in rain and dust so they don’t interest me but visitors have left them for Finn. I go on without him and he calls from a long way off to come back or he’ll give me a smack so he will. I pick up a teddy bear for the unidentified child and tuck it under my arm to give to Finn.

“You’ve had enough for your birthday, my girl,” Ma says. “Besides, it’s bad luck. Childy childy… that’s grave robbing, that is.”

She takes the bear from me and sets it down but it won’t sit up straight and I bend down and pick it up again, all the while telling her it’s for the boy in the ground who’s standing right over there, so it’s not stealing. “He won’t come and get it himself,” I say, but she’s not listening. She’s far away, standing with her bare feet in the Atlantic tide, and it’s the fifteenth-day of April, 1912, all over again.

‘THE UNTHINKABLE SHOES’ by V. KNOX – a Titanic-inspired love story:

A BOY WITH AN UNSINKABLE SPIRIT

To be launched on or before April 15, 2016, the 104th anniversary of the sinking of the Titanic. – GENRE: literary fiction / magical realism / paranormal romance