“Yes, those are definitely my shoes, there in the museum case. Who would have thought I’d be famous for my shoes. And such a sad pair as that. I wore them the day I stepped onto the Titanic and the day I floated free of it, April 15, 1912.”

Thus begins the novel ‘THE UNTHINKABLE SHOES’ – a story about the spirit of a boy who perished on the RMS Titanic and his subsequent journey to a new destination, a place he assumes is his right of passage to a better life. Instead, he finds himself a student in a school of shifting sands he never bargained for.

Finn Cleary is an excited five-year-old passenger heading for a new life on Titanic’s maiden voyage. But fate not only denies him his New York destination, it also separates him from the girl he was destined to marry, as yet, the unborn child of a woman passenger who befriends him.

Finn has tough shoes to fill, trying to compete with his older brother, but his death delivers a tougher quest. Bad timing and old jealousies threaten to trap his spirit in a permanent half-life and crush a star-crossed romance forever.

To recover the threads of his lost future, Finn must heal an old wound and honor his mother’s strict orders to look after the only new pair of shoes he’s ever owned or she’ll skin him alive.

But a promise, made in haste complicates his next incarnation. Finding Finn’s lost shoes may be young love’s only chance to stay together. 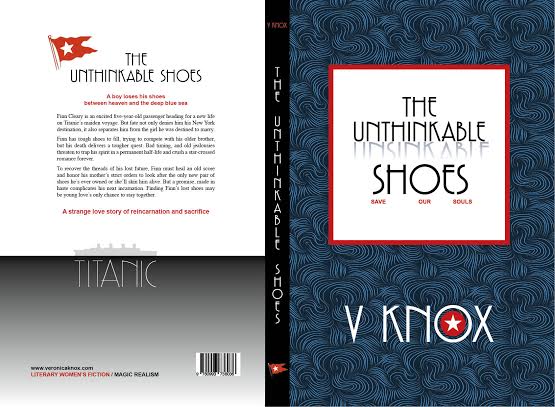 ‘THE UNTHINKABLE SHOES‘ is a work of magical realism and literary fiction.