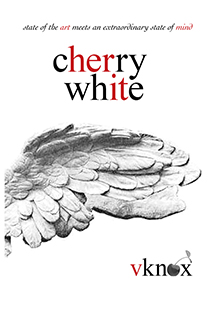 I spy with my little eye

something beginning with fire

Erased emotions quicken when ethics challenges the cold logic of a sentient computer, programmed to save lost art first, regardless of the consequences to those who created it.

Cherry White considered her second life as a time traveler to be a curse until she encountered an untapped source of overwhelming love.

Once a human autistic savant, Cherry is now labelled an ‘it’ by her cybernetic creators, but her damaged senses regenerate when ethics challenge the cold logic of her new role as a sentient computer programmed to save art first, regardless of the consequences to those who created it.

Her function as an organic android is to sift time, scan for destroyed masterpieces, and harvest them for the Fire Gallery of the Phoenix Project.

Lost art consumed by fire is an asset the project’s syndicate of investors deem worthy of breaching the time continuum and human dignity to obtain, but Cherry’s rekindled memories demand a sacrifice when she’s faced with choices that threaten to eclipse her newfound love and destroy a priceless painting by Leonardo da Vinci.

When a surprising anthropology lesson reveals the mysteries of her distant past and explains her erratic life as a mystic savant, Cherry is inspired to mutiny.

Her new allies, the unexpected restoration of primal instincts, and an astonishing quickening of dormant genes create an opportunity to make historic reparation at the expense of extinguishing an amazing scientific breakthrough.

A bizarre plan of sabotage promises to rejuvenate the evolution of compassion in order to revive the highest order of humankind.

Lost art, lost love, a lost species, and a gathering of lost souls are at risk of annihilation, unless Cherry’s conflicting emotions and her allegiance to art can be resolved…‘in time.’

“Joanne was relieved. She had been afraid the job was going to be clinical. The manicure had fooled her. Cherry was groomed to perfection like a doll, but she had emotional dirt under her nails. Genius dirt. The profound dirt of survival in a lonely world that continued to exploit her. The woman had Mona Lisa eyes.”

state of the art meets an extraordinary state of mind

‘Cherry White,’ is a work in progress, due to be published in November, 2014

Veronica Knox has a Fine Arts Degree from the University of Alberta, where she studied Art History, Classical Studies, and Painting. In her career as a graphic designer, illustrator, private art teacher, and ‘fine artist,’ she has also worked with the brain-injured and autistic, developing new theories of hand-to-eye-to-mind connection. Veronica lives on the west coast of Canada, supporting local animal rescue shelters, painting, writing, editing other author’s novels, and championing the conservation of tigers and elephants, and their habitats. Her artwork and visuals to support ‘Second Lisa’ may be viewed on her website - www.veronicaknox.com
View all posts by Veronica Knox →
This entry was posted in Books, Lost Paintings, supernatural, time travel, women's fiction and tagged android, angel, evolution, Leonardo da Vinci, lost paintings, savant, science-fiction, the Nike of Samothrace, time travel. Bookmark the permalink.